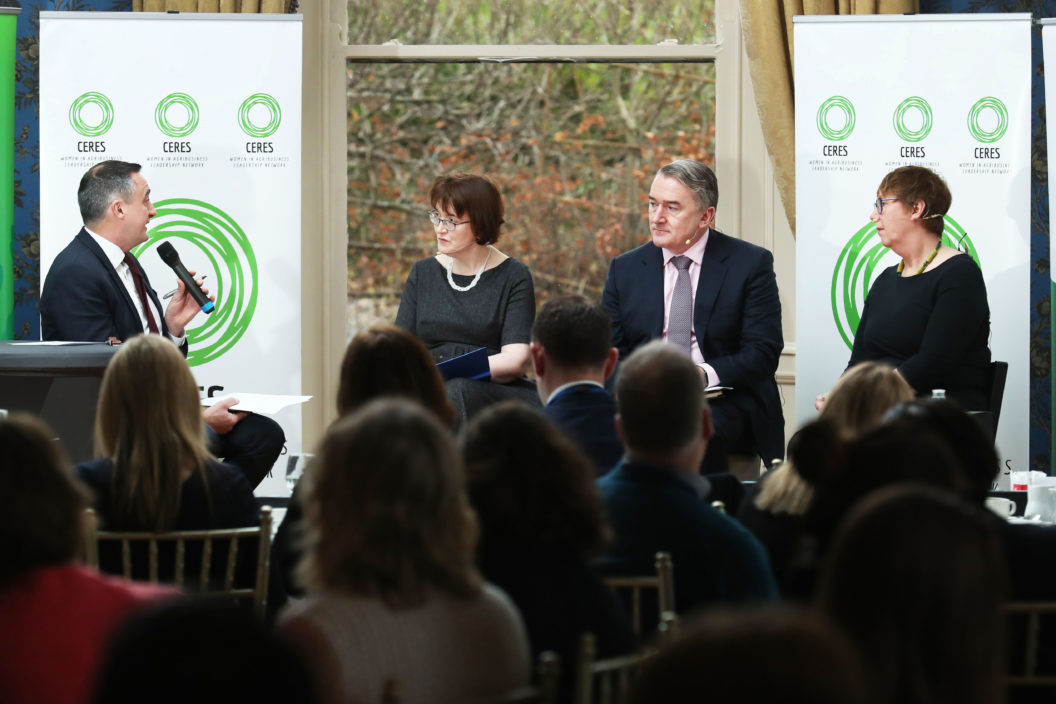 "Diversity isn’t a gender issue, it is a business issue"
- John Jordan, Ornua

"No room for complacency on D&I strategies in agri-food"
– Sinead McPhillips, DAFM

At a Ceres Network breakfast event in the Killashee Hotel in Naas on 24th February 2020, attendees heard that there is no room for complacency when it comes to employing diversity and inclusion strategies in the agri-food industry. The event, which focussed on ‘Striking the Gender Balance in Irish Agri-food’ featured a panel discussion with John Jordan, CEO, Ornua, Sinéad McPhillips, Assistant Secretary General, Department of Agriculture, Food and Marine and Dr. Monica Gorman, Lecturer in agricultural extension and innovation in UCD’s School of Agriculture and Food Science.

In analysing the need for diversity and inclusion strategies, Sinéad McPhillips Assistant Secretary General, Department of Agriculture, Food and Marine (DAFM) stated the importance of metrics to understand where improvements can be made.
“In 2012, DAFM was the worst-performing Government department in terms of gender balance with only 11% of senior managers being female. We are now headed for 30% female representative at senior level but I would still argue that there is no room for complacency. Diversity and Inclusion strategies need to be integrated into the overall strategy for the sector/organisation. For example, we developed a number of agri-food specific targets as part of the National Women and Girls Strategy and we then adopted these into the Food Wise strategy and reporting framework to avoid the silo effect.”

John Jordan, CEO, Ornua said “Diversity isn’t a gender issue, it is a business issue. The fact is that diverse teams deliver better results. Fostering a diverse and inclusive workplace is good for business and is the right thing to do. At Ornua, with over 2,400 employees from over 55 countries – we know first-hand how people with diverse backgrounds can bring their own perspectives, ideas and experiences and lead to a more resilient and effective company.

Striking gender balance is a key part of Ornua’s Diversity & Inclusion strategy and is a key enabler of our five-year growth plan. We are delighted to support the Ceres Network and help build awareness around the role that each of us can play in being advocates and champions of change, accelerating women’s equality in the workplace. We urge everyone in our industry to support #EachforEqual.”

Speaking about how the next generation of graduates entering the agri-food sector will have raised expectations for greater diversity and equality in their careers and family care, Dr. Monica Gorman, lecturer in agricultural extension and innovation in UCD’s School of Agriculture and Food Science, said “Gender equality is impacting on men in the workplace - there are examples of men in senior positions in the sector who are taking parental leave but a critical mass has not been achieved. Younger men’s attitudes are changing from clear breadwinner roles toward being able to integrate their role as fathers with their careers but they are hitting the same barriers as women when it comes to opportunities for work–family balance.”

Explaining the rationale behind today’s event, Roberta McDonald, Chair, Ceres said, “Unconscious bias plays a key role in creating a lack of balance or equality in our industry. Having discussions like today helps to create awareness of these issues and start a conversation. Buy in from senior leadership is a key component to encouraging change and we are delighted to hear from a panel of inspirational leaders from across the sector today. We need champions promoting the value of conversations like this, overcoming any discomfort or unconscious bias when it comes to discussions on gender balance.”